The UILO enables UBC research and innovation partnerships that lead to life-changing innovation. UBC discoveries have been at the heart of products, services and treatments that have generated an estimated $11.5 billion in sales, and have formed the basis of 245 spin-off companies.

Learn more about our high-impact technologies 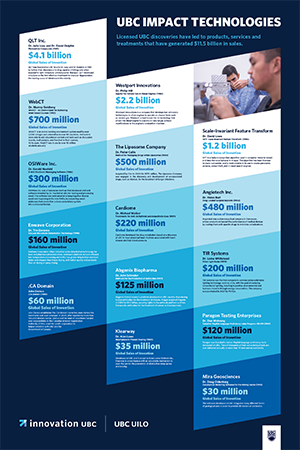 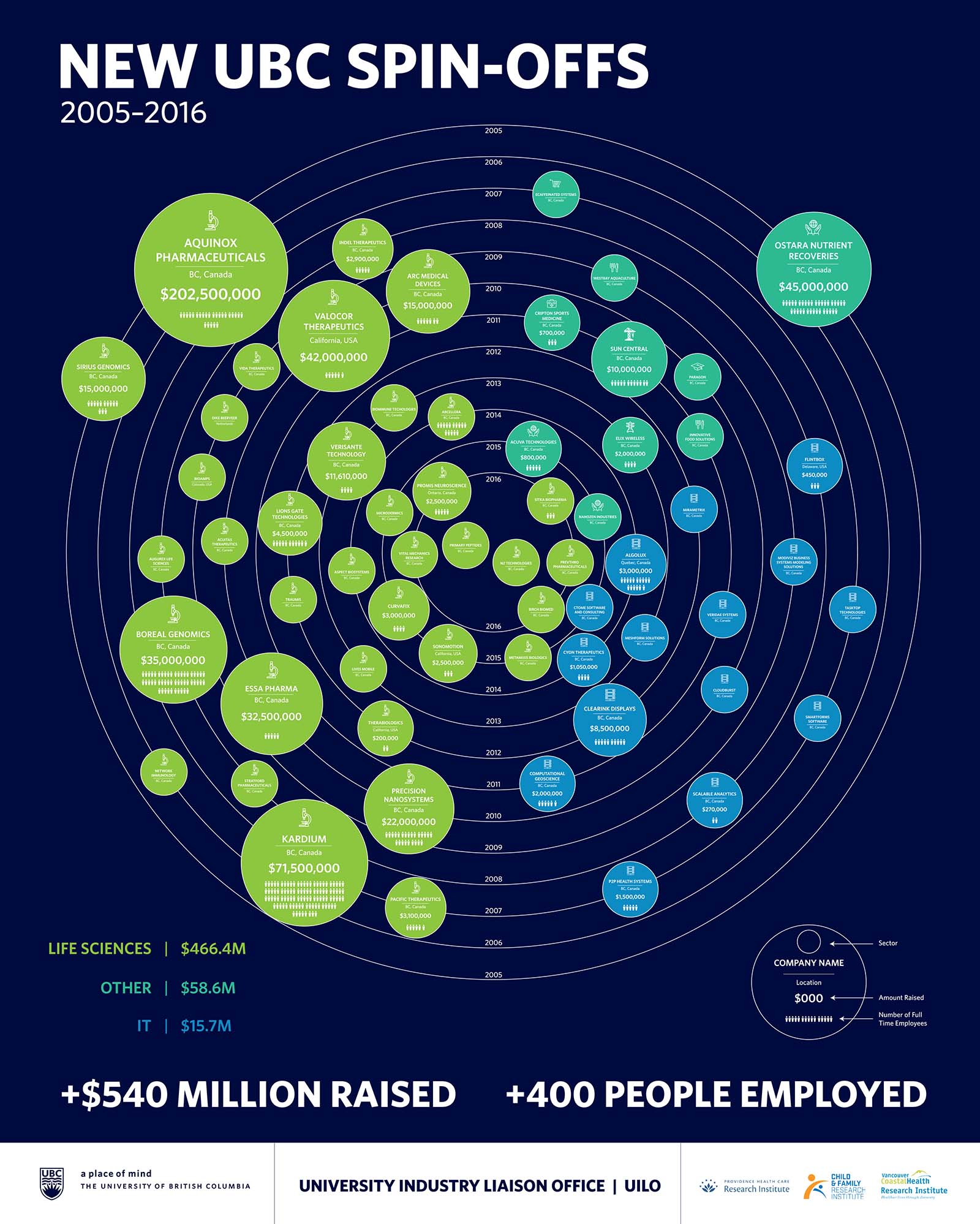 QLT was founded by UBC faculty Dr. Levy and Dr. Dolphin in 1981 to further their discovery of a drug capable of killing cells when exposed to light (Visudyne: photodynamic therapy). QLT developed Visudyne as the first effective treatment for macular degeneration, the leading cause of blindness in the elderly.

Westport Innovations is a company that develops low-emissions technologies to allow engines to operate on cleaner fuels such as natural gas. Westport is best known for its technology that allows the diesel engine to operate on natural gas without modifications to the engine's combustion chamber.

SIFT is a feature recognition algorithm used in computer vision to detect and describe local features in images. The algorithm has been licensed to many companies, and is most notable in its use to create panoramic pictures, detect theft, and in visual search engines.

WebCT is an online learning environment system used by over 2,500 colleges and universities in over 80 countries. Instructors were able to add educational content and tools such as discussion boards, mail systems, and live chat to their courses. At its peak, WebCT was in use by over 10 million students annually.

Acquired by Elan in 2000 for $575 million, The Liposome Company was engaged in the discovery and development of encapsulated drugs, such as Abelcet, for the treatment of fungal infections.

Angiotech was a pharmaceutical company in Vancouver, whose products enhanced the performance of medical devices by coating them with specific drugs to minimize complications.

OSIWare Inc. was a Vancouver start-up that developed and sold software invented by Dr. Neufeld at UBC for routing and processing email. The software was instrumental in tying together diverse email nets beginning in the late 1980s, by converting email addresses from more than a dozen proprietary systems into a universal format.

Cardiome developed the drug vernakalant based on a discovery at UBC to treat abnormal heart rhythms associated with heart disease and high blood pressure.

TIR Systems was the first company to commercialize solid state lighting technology, such as LEDs, with the goal of replacing conventional lighting, resulting in positive environmental and business impacts through energy conservation. The company was purchased in 2007 by Phillips.

Dr. John Schrader
Methods for the Production of Antibodies (1991)

Paragon was founded to deliver English language proficiency tests developed at UBC. Tens of thousands of their computerized tests are now delivered annually in more than 70 test centres worldwide.

John Demco established the .CA domain name two years before the world wide web even emerged. In 2000, after registering more than 100,000 domain names, Demco and his team of volunteers handed over responsibility to the Canadian Internet Registration Authority (CIRA), a not-for-profit corporation he helped establish with UBC and the Government of Canada.

Developed at UBC and licensed to Great Lakes Orthodontic, Klearway is a mouthpiece with an adjustable mechanism to open the jaw for the prevention of obstructive sleep apnea and snoring.

The software developed at UBC integrates many different forms of geological data in order to provide 3D models of ore bodies.