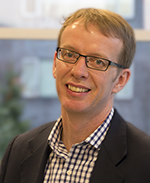 J.P. Heale has worked at the University-Industry Liaison Office (UILO) at The University of British Columbia for the past thirteen years, most recently in the capacity of Associate Director, before being appointed Interim Managing Director in February 2014.  He has overseen intellectual property management and licensing associated with UBC’s Affiliated Hospitals. Additional duties included oversight of sponsored research and clinical trial agreement negotiation and implementation.  J.P. also manages external relations with such UBC-affiliated agencies as the Canadian Institutes for Health Research and the Centres of Excellence for Commercialization and Research.  J.P. enjoys participating in the creation of spin-off companies based on University technologies, and was active in the formation of Indel Therapeutics, viDA Therapeutics, Boreal Genomics, Sirius Genomics, and ELIX Technologies which have raised over $40 million in private capital.

J.P. graduated from UBC in 1997 with a doctorate from the Department of Biochemistry and Molecular Biology, and subsequently worked as a Post-Doctoral Fellow and Research Associate.  J.P. received an MBA from Simon Fraser University in 2001 while working as Manager of Business Development at a UBC spin-off biotech company.  In late 2001, J.P. joined the UILO in the Technology Transfer Group. The next year he became Technology Transfer Manager for the Children’s and Women’s Health Centre of BC, one of the affiliated hospital of UBC.  J.P. took on the role of Associate Director in April 2004.

J.P. is member of the Alliance for Commercialization of Canadian Technology (ACCT), the Association of University Technology Managers (AUTM), and Life Sciences.  He is a grant reviewer for the CIHR Proof-of-Principle Committee, a member of the Research Advisory Council of Cystic Fibrosis Canada, the CECR PROOF Translation Advisory Committee, and Chairs the UBC Technology Equity Management Committee. He has previously been an observer on the boards of viDA Therapeutics Inc., Sirius Genomics Inc. and Boreal Genomics Inc.

The UILO conducts the technology transfer and commercialization activities at UBC.  UBC consistently ranks among the top ten North American universities for its patenting and commercialization activities. UBC currently has over 350 license and assignment agreements with companies around the world and has actively supported the creation of over 180 spin-off companies.